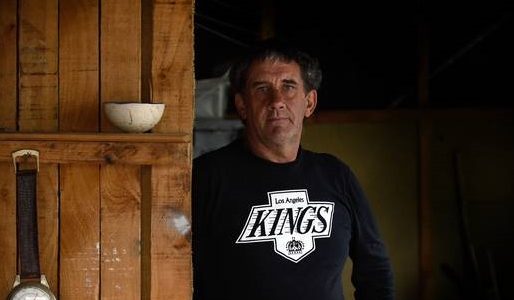 It’s a bleak rainy grey day in Greerton but that doesn’t stop Darren Skelsey from offering a beaming grin while holding out a tattooed hand.

The 51-year-old is used to the elements – he’s spent countless years braving them while living on Tauranga’s streets.

But all of that has changed.

With a bit of help, Skelsey now has a home to call his own, an income he budgets with, the right medical help he needs, and he’s working on finding a job. It’s not easy, he says.

Skelsey’s salt-and-pepper curls are accentuated by speckled black and grey track pants as he takes a seat inside a friend’s garage.

Despite his smile and frank openness, Skelsey’s face is weary. He’s first to admit he’s done it pretty rough over the years.

Skelsey lists off some of the places he’s slept; four months in downtown Tauranga, nine months on 15th Ave, another few months by a hall on 17th Ave, and 18 months on Fraser St near Tauranga Intermediate. Often, in a tent.

Skelsey’s family life is fractured, at best. He fell into homelessness “quite a few years ago” with a friend, and continued with life on the streets because, for so long, that was all he knew.

“It was the People’s Project which has helped me get a place,” he said.

Skelsey says if it wasn’t for that help, there’s no doubt he would be back on the streets, living off money from his benefit.

“Sometimes I feel I was better off living in tents.”

When asked if that is really what he wants, his tired blue-green eyes look to a spot on the floor nearby.

Skelsey suffered robbery, blood poisoning and pneumonia while sleeping rough but it was an attack three months ago in which “they bashed my head in” that sparked his desire for a better life.

But it doesn’t take away the guilt he harbours for “the other streeties”, the ones he would usually protect or buy food for with that benefit money.

“I know a lot of the homeless on the streets around Tauranga. I’m always helping someone else out. People say I should start looking after Number One for a change but that’s just the way I am. I’m always giving, all of the time.

Skelsey is now channelling his urge to help by volunteering at the food bank. Tuesday was his first day there. He says it’s a way he can give back to the service which helped him find footing on his new path.

To our left, inside the garage, is a large pile of firewood Skelsey’s friend later tells me he stacked for her that morning. Another example of his giving nature, she says.

Skelsey is keen to get stuck into paid employment too but has been advised to wait until his hand, blighted with nerve damage, is operated on early next year. He has been liaising with the team at Workbridge about future work – something he can contribute to and earn a wage with.

“All I want is a quiet and peaceful life, no stress. I want to get into a paid job where I’m treated right,” he says.

Skelsey doesn’t drive, and often walks an hour-and-a-half from his place into town. The exercise does him good, he says. But he misses his old friends from the streets, and struggles with life’s new responsibilities.

It’s a crossroads of sorts for Skelsey, but he knows where he wants to be despite the challenges he faces.

The rain outside stops and Skelsey gets up from his seat as we discuss the foodbank parcels. He lights up, explaining he’s quite a good cook. He says he looks forward to the day when he will be able to host a dinner party and maybe invite some of those old friends he misses over for a meal.

For many, it’s probably not much of a dream but for a man who’s lived with nothing most of his adult life, such goals are worth fighting for.